Where your water comes from

Southern Nevada gets about 90 percent of its water supply from the Colorado River, which begins as rain and snowmelt in the Rocky Mountains. The river serves about 40 million people across seven western states and the country of Mexico. The river is governed by a series of compacts, laws, court decisions, rules and treaties, collectively known as the "Law of the River."

Nevada has the right to consumptively use 300,000 acre-feet of water per year. An acre-foot is the amount of water that can cover an acre to a height of one foot and is equivalent to 325,851 gallons of water.

Consumptive use is defined as water withdrawals (or diversions) minus any water that is returned to the Colorado River. These returns are also known as "return-flow credits."

The Colorado River has endured more than 20 years of severe drought, which has reduced the amount of water in Lake Mead. The best scientific projections available suggest that current Colorado River conditions will not only continue but worsen. Leading climate scientists warn of a permanent shift to a drier future, something known as "aridification."

While the Southern Nevada Water Authority does not anticipate near-term customer impacts associated with a federal shortage declaration due to community response efforts, continued water conservation will remain a critical priority in the years ahead. Meeting the community’s long-term water resource needs will require significant and sustained contributions from all community sectors on an ongoing basis.

About 10 percent of Southern Nevada's municipal water supply comes from Las Vegas Valley groundwater. Groundwater is pumped from the underground aquifer, which is fed by rain and snowmelt from the mountains surrounding the Las Vegas Valley.

Our community relied on local groundwater supplies to meet most of its water needs until the early 1970s, when facilities to treat and deliver Colorado River water were constructed. Today, this water source remains a critical component of our community's water resource picture.

The Water Authority developed and manages the Las Vegas Valley Groundwater Management Program to help protect the Valley's groundwater basin from being overdrawn and potential sources of contamination.

Approximately 40 percent of the water in the Water Authority's service area is used indoors. Of that, about 99 percent is recycled, either for direct or indirect use.

In contrast to water used indoors, water that is used and/or wasted outdoors evaporates and cannot be used again. This is "consumptive use" as the water is consumed and cannot be reused.

When you take a shower or wash your laundry, the unused water flows into the sewer system. This sewer water travels to a wastewater treatment facility, where it is treated.

The highly-treated wastewater is returned to the Colorado River via the Las Vegas Wash, which flows into Lake Mead. The water returned to the lake earns us return-flow credits.

Every gallon of water that is returned to the Colorado River through return-flow credits allows Southern Nevada to take another gallon out, which stretches our limited water supply.

Nearly 100% of the water used indoors is captured and reclaimed through the wastewater system, where it is safely treated to clean water standards.

Conservation as a resource

Water conservation is a cost-effective resource that helps reduce current and future demand for water. Like water reuse and recycling, water conservation helps stretch our community's available water supplies, especially during drought, by freeing up water that is used inefficiently or wasted.

Unlike water used indoors, water used outdoors for irrigation and cooling cannot be captured, treated or used again. This is why the SNWA focuses largely on outdoor water conservation and education with programs designed to reduce our community's water use.

How Colorado River water is allocated

The Colorado River is a shared resource that serves nearly 40 million people in the U.S. and Mexico, including the states of Colorado, Wyoming, Utah, New Mexico, Nevada, Arizona and California. The river supports many different uses such as municipal and industrial water supply, hydropower production, agriculture and recreation. Many plant and animal species also depend on the river.

Colorado River operations and water use are governed by a series of contracts, regulatory guidelines, federal laws, compacts, court decisions, decrees and a treaty with Mexico. Collectively, these are known as the "Law of the River."

The first major diversions of Colorado River water began in California in the late 1800s to support agricultural production in that state. As the amount of water diverted from the river increased, some states grew concerned about their future rights to the river and negotiations began on how to equitably distribute the river's flow.

These negotiations led to the 1922 Colorado River Compact, which divided the Colorado River Basin into two Divisions - the Upper Basin and the Lower Basin - and allocated 7.5 million acre-feet of water per year (MAFY) to each. The compact also recognized Mexico's right to Colorado River water and 1.5 MAFY was granted in 1944 through an international treaty between the U.S. and Mexico.

The 1928 Boulder Canyon Project Act further divided the river among the Lower Basin states of Nevada, California and Arizona. Nevada's share was 300,000 acre-feet per year. At the time, Nevada's negotiators felt this amount was more than enough. Southern Nevada had no significant agricultural or industrial users, groundwater seemed plentiful, and the area’s small population was not anticipated to grow significantly. Negotiators focused instead on hydro-electricity and secured one-third of the electricity generated by Hoover Dam.

A total of 16.5 million acre-feet per year are apportioned among the seven states that share the Colorado River, as well as Mexico. 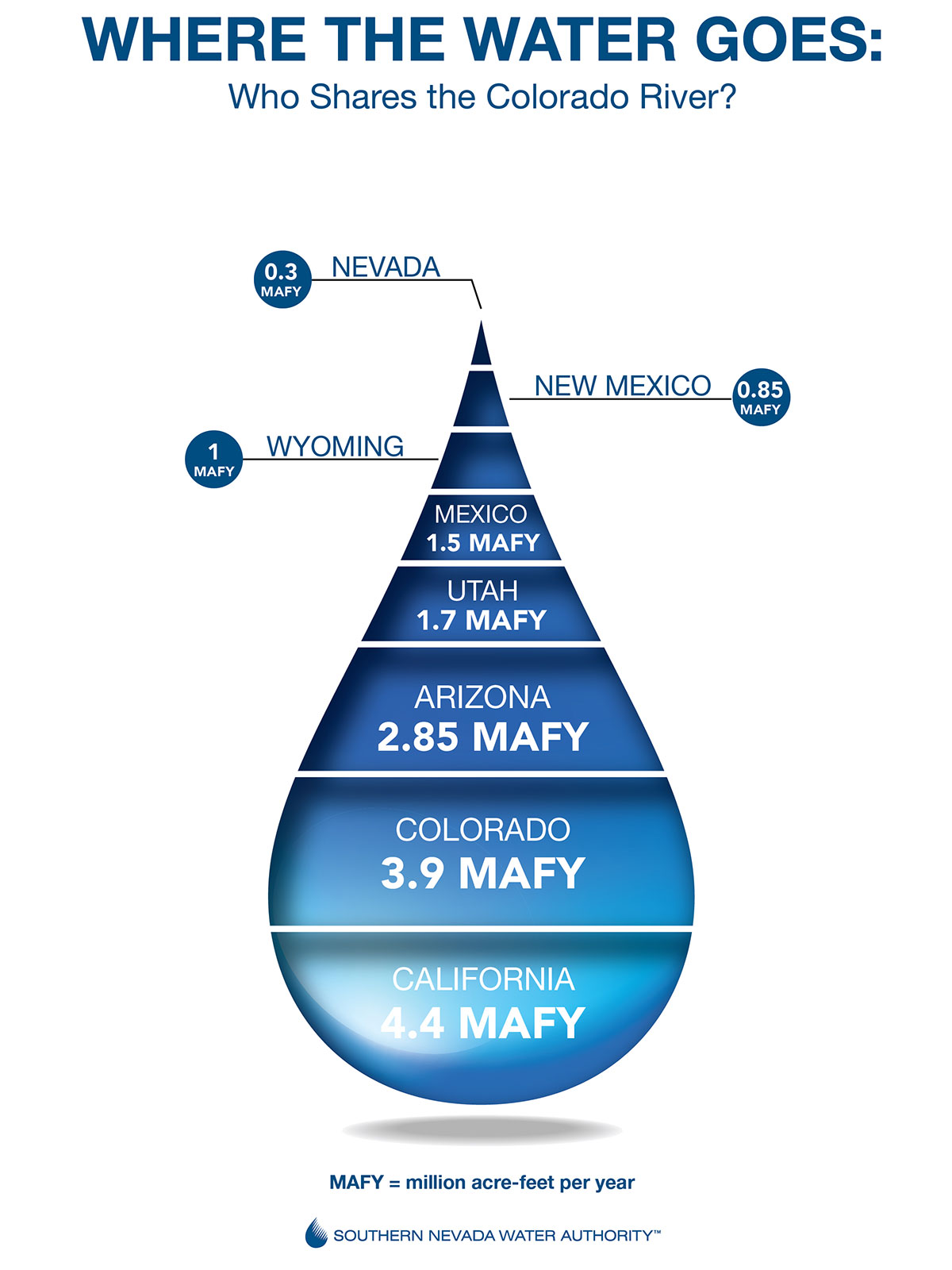 The Colorado River Compact was negotiated during the wettest period in the river's recorded history. At the time, the river's flow was estimated to be 18 million acre-feet per year (MAFY) at Lee's Ferry, located just below Lake Powell. The average natural flow in the river since 1906 has been 14.6 MAFY. Over the most recent 23-year period, Colorado River inflows averaged 12.2 MAFY. Meanwhile, current allocations (U.S. and Mexico) total 16.5 MAFY, excluding evaporative losses in the Lower Basin.

Consequently, the sum of the state’s apportionments and Mexico's treaty exceed the river's flow in most years. In addition, drought and climate change have significantly reduced the average runoff into the Colorado River and resulted in shortages.