Drip irrigation systems are ideal for desert plants because they apply water slowly and deeply to a plant's root zone, which allows dry desert soil time to absorb water that would otherwise evaporate or run off.

At least three days before you do any digging, remember to "Call Before You Dig" by dialing 811 to check for any buried utility lines.

With the many different components that make up a drip irrigation system, it's easy to feel overwhelmed. First, familiarize yourself with all the parts of the system. 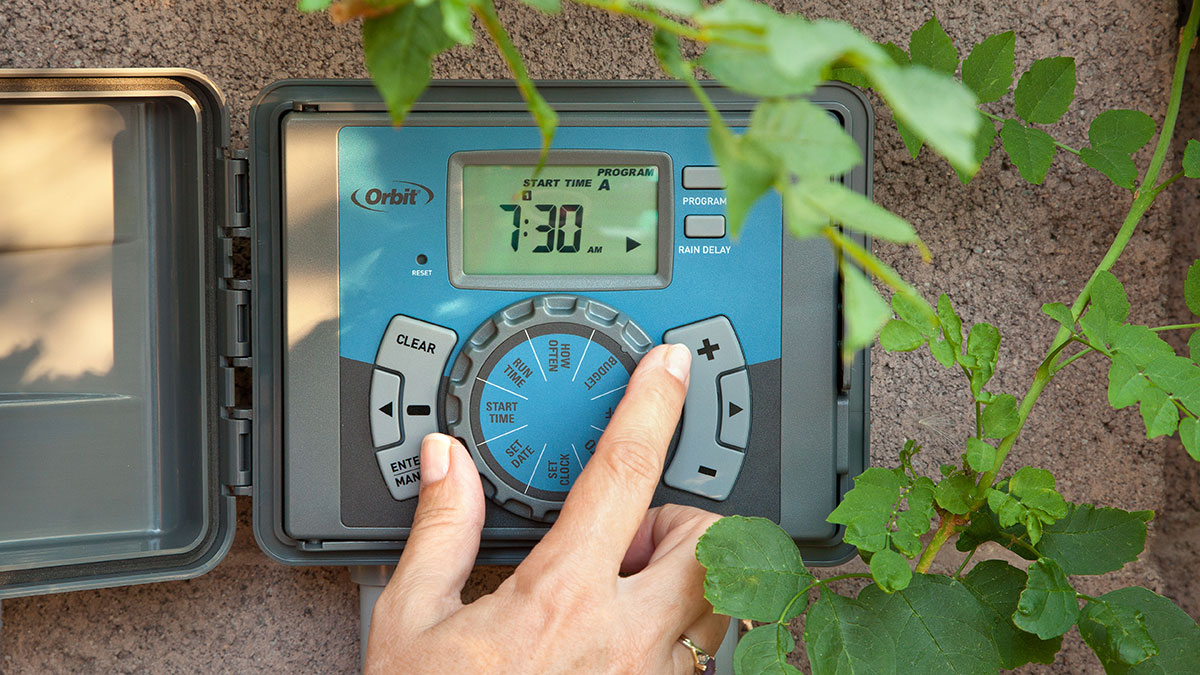 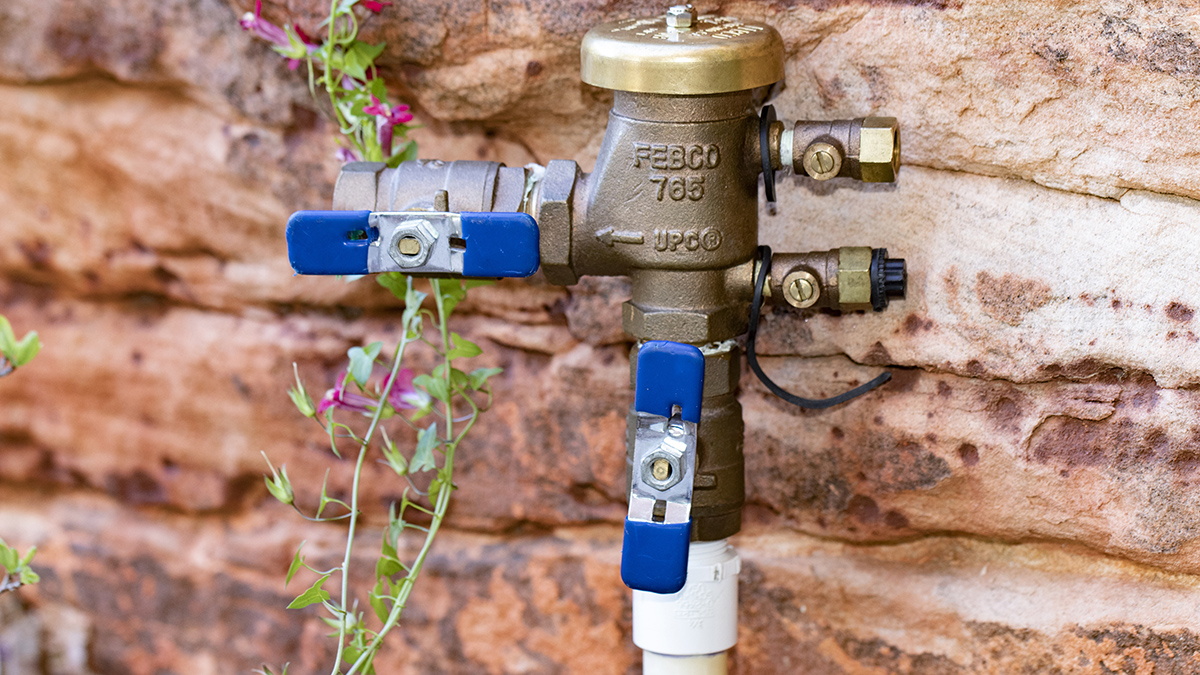 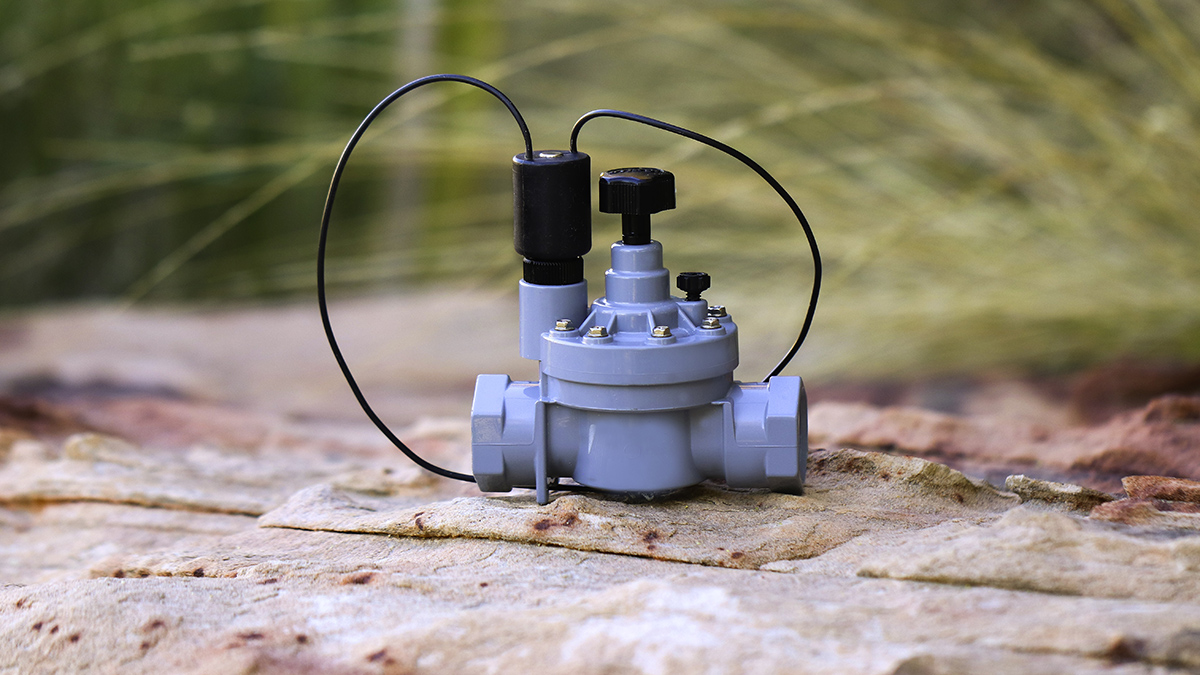 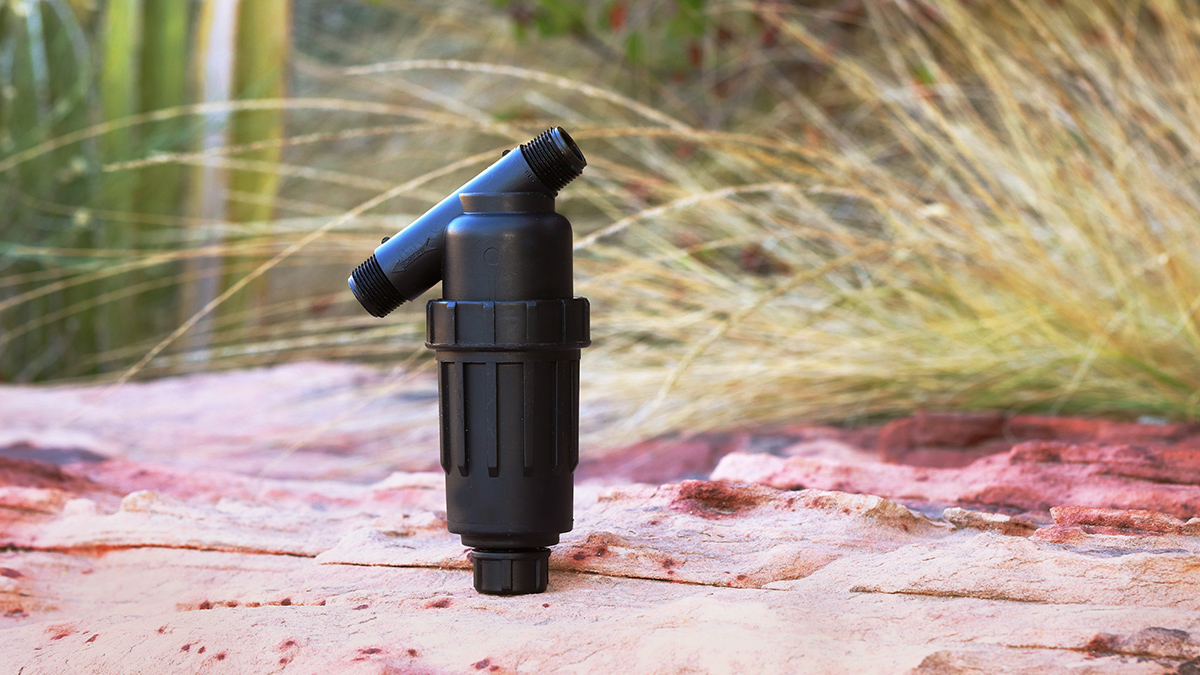 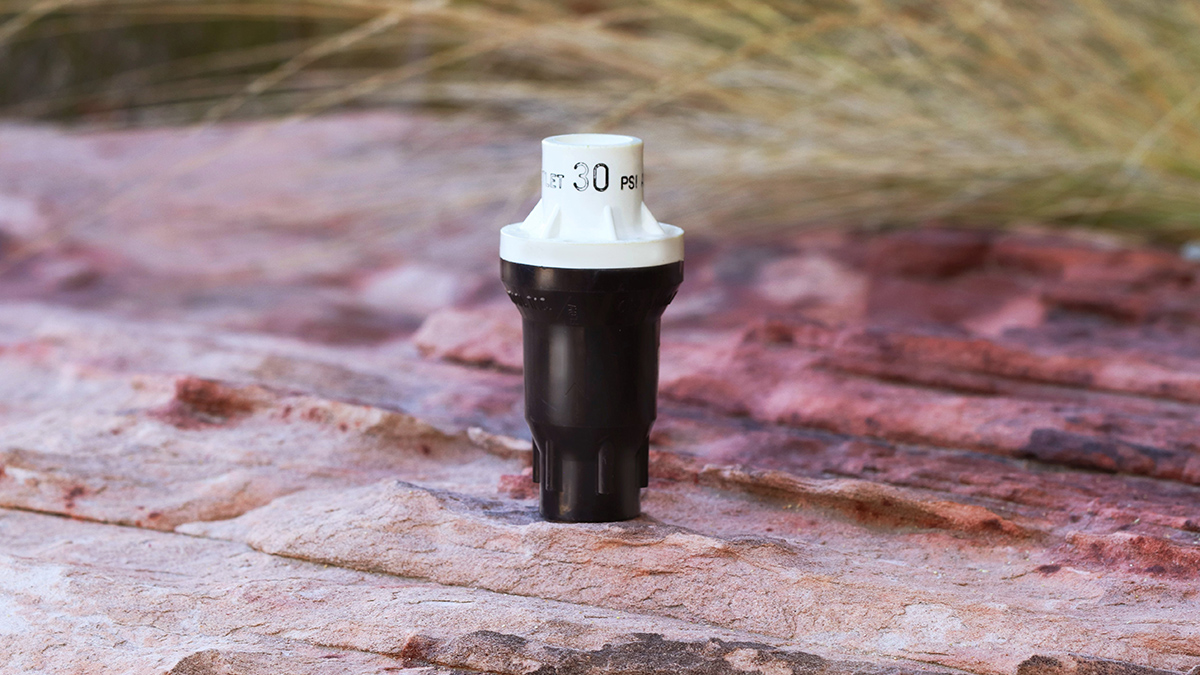 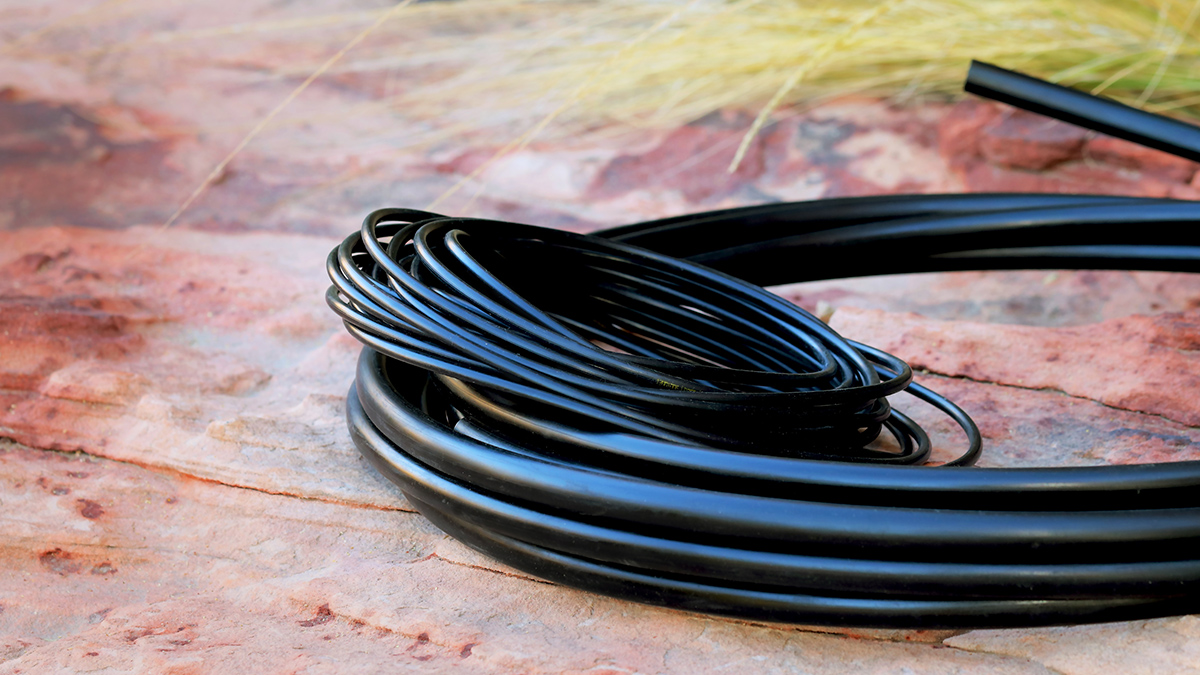 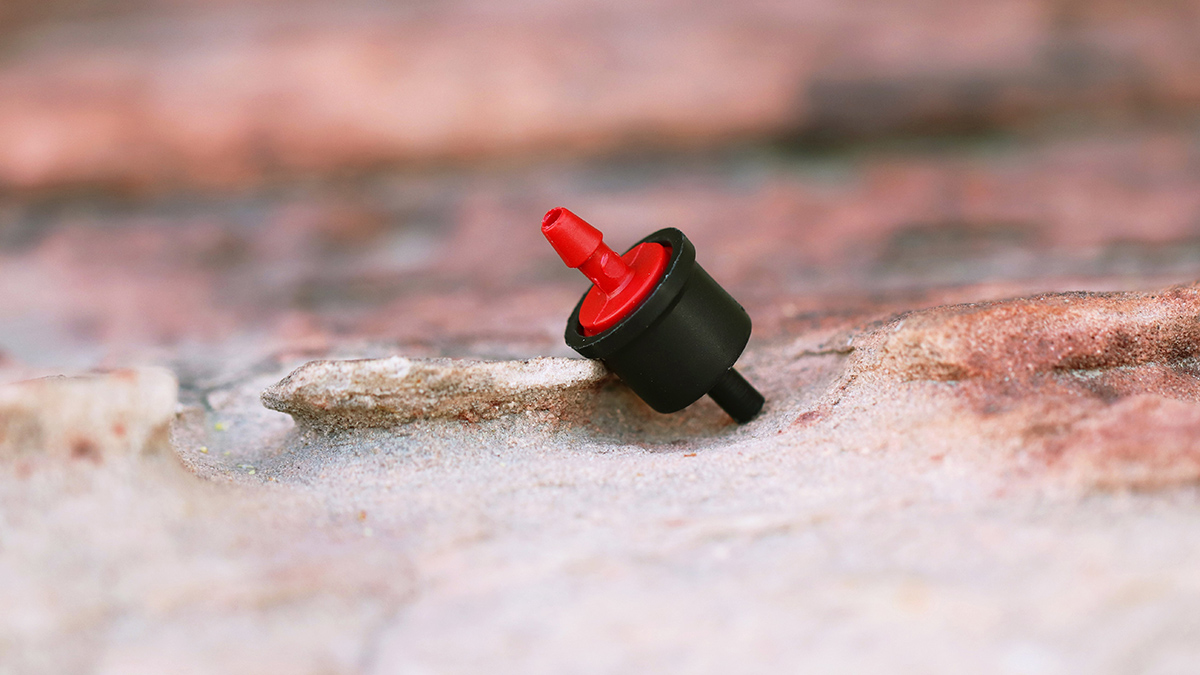 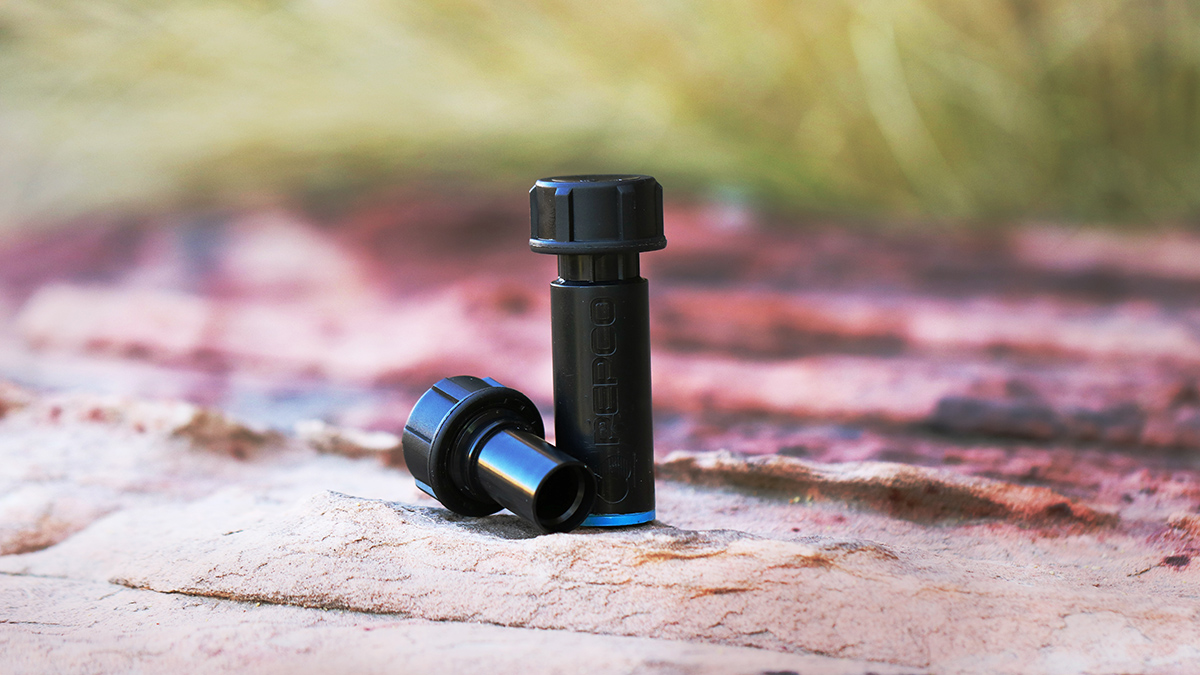 The irrigation clock serves as a "brain," regulating watering. This device can be programmed to run your system automatically and is wired to the electrically operated valves.

The backflow prevention device is a valve that prevents irrigation water from flowing back into your home's drinking-water supply. This device is critical for health and safety and must be included in any irrigation system. Local codes require the installation of a pressure vacuum breaker (PVB), a backflow prevention device that is easily tested and can accomodate multiple irrigation valves. A freeze-proof model is recommended.

The electric control valve is an automatic valve that controls the flow of water to the irrigation lines. It is wired to your irrigation clock and opens and closes according to your clock's programmed schedule.

A filter must be installed after the control valve to trap any particles in the water that may clog the drip emitters. At least a 150 mesh filter is recommended.

A pressure regulator is a required component that reduces pressure to the lowest level required for drip systems, usually about 20–30 pounds per square inch (PSI).

The pipes and tubing of an irrigation system carries water throughout the system. Pipes are generally either hard, white polyvinyl chloride (PVC) pipe or a black, flexible polyethylene pipe (PE). Drip systems use mostly PE but will include some PVC at strategic points.

The emitter delivers water directly to the plants. Many different types of emitters can be used, including single-point emitters, multiple-outlet emitters and drip lines (emitters and piping combined in one continual piece). Pressure-compensating emitters are suggested as they control water for even application on long rows or uneven slopes. Emitter flow rates range from .5 gallons per hour (GPH) to 20 GPH and cannot flow higher than 20 GPH.

The end or flush cap is attached at the end of an irrigation line so the system can be flushed clean of any accumulating debris.

Use these tips to help you install a drip irrigation system.

Water conservation expert Toby Bickmore explains the complexities of a drip irrigation system and its many components.

Installing tree irrigation: Trees require water in a larger area to allow the roots to spread out and provide a sturdy base for the tree. Young trees need enough drip emitters to cover the canopy from the tree trunk out to the ends of the branches. Mature trees should have enough drip emitters surrounding it that 50 to 75 percent of the tree's canopy area should be wet.

The process of installing an irrigation system can be broken down into these eight steps:

City codes require that a backflow prevention assembly must be included in your irrigation system. The backflow prevention device stops irrigation water that potentially carries chemicals such as fertilizer or weed killers from flowing backward into your home's drinking water. While home builders in Southern Nevada typically install a pressure vacuum valve (PVB) during construction, changes to your landscape may require moving it to a higher elevation or new location. A plumbing permit, which is obtainable through the city or county, is required for installation. Call before installation to get clear code requirements.

If a new backflow prevention assembly or moving the assembly is required, determine a location for placement. The most common type used on homes in Southern Nevada is called a pressure vacuum breaker (PVB). It should be at least 12 inches above the highest irrigation device and 12 inches away from any walls to allow for access. If you have a large hill with irrigation on your property, the PVB should be installed higher than the hill, or you can install an additional PVB at that location.

The valve box is buried underground and protects the valves, filter and pressure regulator. To install the valve box, follow these steps:

Start by digging trenches from your valves and run them everywhere you plan to lay pipe and/or tubing. PVC pipe needs to be at least 12 inches deep, while the poly tubing used for drip irrigation only needs to be six inches deep. Digging trenches is hard work, so make the most of them by using the same trench for different landscaping needs. Irrigation and lighting wires can be run in the same trench. Trenchers are available at equipment rental stores, but you will still need to do some trenching by hand around corners, in small areas and around tree roots.

Your landscape irrigation system will use two types of pipes, PVC pipe and PE tubing (poly-tubing). To install pipes and tubing, follow the steps below:

Using the trenches dug for your pipes and tubing, you will run wire from the clock to the valves. Irrigation wire comes with one white wire and multiple colored wires. The white wire is the common wire and attaches to every valve in your landscape. The colored wires are specific to each valve. Attach the colored wires to your clock in individually numbered terminals. After attaching, protect the connections with waterproof wire caps.

Microtubing and emitters connect to half-inch poly tubing. Run microtubing no longer than 15 feet, and attach an emitter to the end of the microtubing.

Place your emitters further apart if you have hard clay soil. Because water moves to the roots much slower in hard clay soil, a slow flow rate such as .5, 1 or 2 GPH (gallons per hour) should be used. Sandy soil is the opposite and emitters with higher flow rates should be used (4 GPH to 20 GPH).

Now is the time to decide if you want to place the emitters for each plant in anticipation of its future size or if you'll add emitters as the plant grows.

Backfilling is the process of refilling all your trenches with soil again, covering all of your pipes, tubing and wires. Before you replace the dirt, screen the soil to remove large pieces. The dirt may contain rocks and other materials that can damage your tubing.